Yesterday evening at the Cumberland Presby Children’s Home, 40 children of deployed military families and children from abusive households received free bicycles and helmets for the holidays.  Through a collaborative effort by Gina Atkinson (Denton Chamber Ambassador), the VVA, Little Guys Movers, and Querencia Community Bike Shop, the bikes were purchased, assembled, and delivered.  Some kids immediately jumped on and started turning laps around the circle driveway, grinning from ear to ear.  If you’ve never seen anything like this, it’s a wondrous sight, and I won’t be surprised if this event gets more popular each year. There’s a special satisfaction in helping assemble the bikes and then seeing them ridden by happy kids at the award ceremony.  If you want to contribute or help next year, get in touch with Querencia or Little Guys next winter, because I have a feeling they’ll be busy elves in the Little Guys’ warehouse again.

On June 15, 2010, Denton signed a $10,000, 2-month contract with engineering firm Freese & Nichols to prepare a new plan for a Safe Routes To School program at elementary and middle schools.

This plan will cite areas around each school that require attention for crossing of barriers and provision of sidewalks or other safety measures to encourage walking or bicycling to school for households within one mile of school.

In addition to interviewing each of the 20 elementary school administrators, the consultant will identify and prioritize the following barriers to walking and bicycle within one mile of the school:

This project is an undoubtedly good move for Denton, although we realize that plans can be ignored or require additional planning.  The real kicker is how the city will (or won’t) fund the final recommendations.  We hope that the final recommendations will include formation of an ongoing Safe Routes program for Denton and not just a one-time analysis.  The national Safe Routes website explains how to set up a successful program, and as you can read, it ties together folks from all parts of a community to work continuously towards improvement.

Did you notice that Krum recently received $1,000,000 in Safe Routes funding?  They must have applied for funding from the $54 million that Texas distributed this year for Safe Routes.  Let’s hope that this consulting plan gets us closer to applying for funds of our own, because I must admit, we weren’t expecting a Krum to lead the local mobility charge.  Like all those cities that applied for the $54 million in 2009, we need a shovel-ready plan.

Bike Lanes Vs Wider Outside Lanes

Which do cyclists prefer?  Does one encourage more use than the other?

“In particular, one general conclusion that leaps out from the results is that for both cyclists and motorists, bike lanes provide greater comfort and a better operating environment than wide outside lanes.”

“There are times I ride in Austin, and I’m afraid of cars, imagine what the beginner cyclist must feel like?

Lance Armstrong’s statement echoes our sentiment that the overall goal of implementing on street facilities like bike lanes, sharrows, cycle-tracks, etc is to safely encourage riders of all skill levels to feel comfortable.  We aim to encourage children, college students, parents, and grandparents to all feel comfortable and welcome, as the spirit of the Denton Plan insists that we should reduce the number of vehicle trips. Increasing bicycle, pedestrian, and bus transit mode share is the only way to offset motor vehicle use, and accommodating experienced cyclists clearly doesn’t get us any closer to the stated goal of the Denton Plan.

The following photo, which we recently took in Austin, shows parents riding with their child, clearly feeling comfortable and safe in a new bike lane added to 12th st (and existing car lanes shrunk to 10.5′).  This family is a great example of a cycling demographic we never see in Denton: parents and children riding together on the roadway.

“Bicycle lanes will not shelter or provide protection to pedestrians, or bicycles for that matter beyond hopefully a greater visual recognition.”

While we agree that the statement is true, it is also true that traffic lights, cross walks, lane markers, and warning signs also offer no physical protection for drivers, cyclists, or pedestrians.
As witnessed last May at the Oak/Hickory bike lane hearing, staff seemed immovable on their preferred wide (11-12′) lane width for Oak and Hickory.  As several in attendance pointed out, slightly less lane width (10′) would actually calm traffic and allow for bike lanes and parking stalls, thus leaving all parties satisfied.  The Oak/Hickory neighborhood has long desired traffic calming measures, and getting more cyclists on the roadway would significantly calm traffic, thereby making the area safer for all transit modes.
Countless examples from other cities show lane widths much smaller.  This example from the Chicago Bike Lane Design Guide shows that Chicago has no problem with 10′ lane widths, even with the far greater density and traffic load of the metro Chicago area.  If you subtract 12′ for one side of parking and bike lane, then you’d be at 32′ total, or 2′ less than the narrowest point of Oak/Hickory (34′, we think).  Now there’s a nice surplus to increase the bike lane size and/or include a buffer between the bike lane and traffic lane.

Your bicycle coordinator is representing an older system that works for perhaps only 1% of the population: what we call the “strong and fearless” cyclist. Basically, we credit the development of our bicycle infrastructure with encouraging more people to ride bikes. There will always be a small fraction of people willing to ride on the roadway in a shared travel lane. But more people will ride if they can get out of the traffic stream and ride in their own dedicated space. Those people are still a small minority–perhaps 7-10% of the population, but they create a presence. In Portland, that’s the group that’s largely responsible for Portland being such a bike-friendly city. They wouldn’t be there without bicycle lanes on the street and other dedicated bicycle facilities. It’s the same story in Amsterdam, Copenhagen, Muenster and Beijing: build great facilities where people feel safe and comfortable and people will ride.
There is a difference between “safety” and “comfort”. A person riding in the middle of a busy travel lane is likely quite safe. They are not likely to be rear-ended. However, it is also more than likely that the average person is anything but comfortable in such a situation. Likely, they are intimidated by the cars streaming around them, or following them closely while waiting for an opportunity to pass. The cyclist feels like they are holding everybody up. The Dutch emphasize both comfort and safety in the development of their facilities (as well as attractiveness). Comfort is different from safety.
One story I like to tell is that I’ve ridden the same street to work for years. Before it had bike lanes I wore lycra, rode my road bike, carried my work clothes in a back pack and rode like hell. Once we striped bike lanes on the street I took out my clunker, wore my work clothes, slowed way down (so I don’t work up a sweat) and feel very comfortable doing so because I then had my own dedicated space. It felt great. Our story is build it and they will come. We’ve built it and we now are approaching 6-8% mode split.

We recently rode the new striped bike lanes in Austin, TX, especially on Dean Keaton, MLK, 12th street, and Chestnutt, and our feeling of comfort was dramatically different than when we last rode these streets on wide outside lanes.  The painted lanes seem to inform the drivers as much as the cyclist that “this space is designated for cyclists, and they have a right to be here”.  Austin traffic engineer, Nathan Wilkes, explained that the traffic counts for autos stayed the same before and after auto lanes were slightly narrowed and bike lanes were added.

The perfect comparison exists here in Denton, and we challenge all city staff and politicians to ride the city streets on a bicycle, as we do.  Ride Oak St from the square to UNT.  Then ride Hickory St from UNT to the square.  There is a dramatic increase in comfort when using the bike lane on Hickory, and traffic flows smoothly past the bicycles.  However, on Oak the traffic often changes lanes to pass the cyclists (thus disrupting smooth traffic flow), and the cyclist feels crowded and out of place.  A simple observation of the exponentially greater cycling traffic on Hickory concludes that an overwhelming majority of cyclists seek out a painted facility rather than a wide outside lane.  Comfort, safety, and increased ridership are clear goals of the Denton Plan and citizens.  A policy of wide-outside-lanes will never meet all three goals, and it certainly won’t encourage cycling in Denton.

This weekend is the 27th annual Turkey Roll ride, organized by the Denton Breakfast Kiwanis Club, a nonprofit that seeks to improve lives of young persons all over the world.  Proceeds from the Turkey roll help them sponsor seven Sponsored Youth Clubs, as well as providing back-to-school supplies to over 1,000 kids under their association with The Apple Tree Project.

Also new this year, we’re having a Spaghetti Supper from 5-7pm Friday night at the Fairgrounds. Come early and “carbo-load” for the big ride the next day. The cost of Spaghetti Supper is $8.00 for adults and $5.00 for kids under 12. Payment for the spaghetti Supper may be included in your Turkey Roll registration fee. See inset for more details.

Helmets are required and the rally goes on rain or shine. No refunds. 2009 Turkey Roll T-shirts to the first 500 entrants.

As seen over on the qcbs.org site, Querencia concluded its first ever Bikes-To-Kids program last week on Thursday, and they have some pictures of the excellent artwork made by the 4th and 5th grade Art Club students. 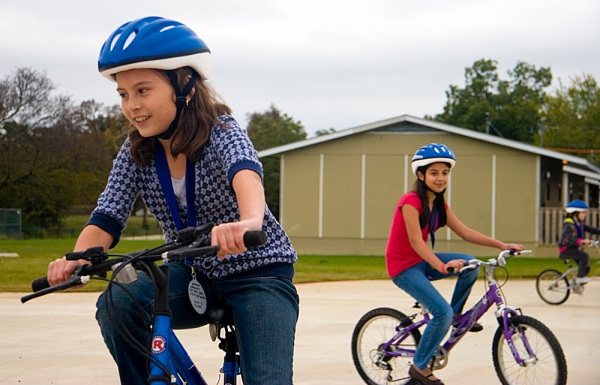 This week, the Querencia Community Bike Shop is putting on a Bikes-To-Kids event at Tomas Rivera Elementary in SE Denton.  The children from the after-school art club have been working on drawings and essays about bikes.  The top three winners will receive free bikes from Querencia and free helmets from the Denton Police Department.  The awards ceremony is open to the public, 2:30PM, in front of the school next to the marquee. 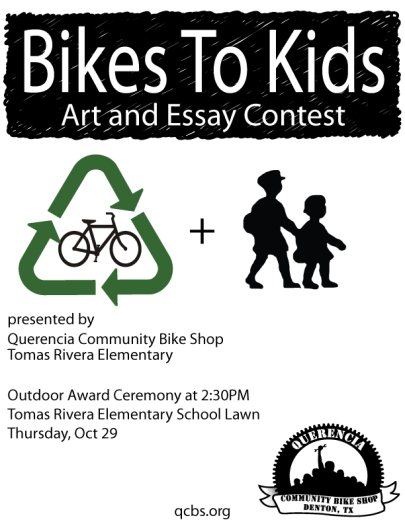 At last night’s city council meeting, Southridge resident Sarah Richey addressed the council to request a bike lane for Pennsylvania Drive.  With support from others in Southridge, Sarah requested the city council to take action and respond to the request.

Pennsylvania is quite wide for a residential street, but it also lacks sidewalks.  Children attending Sam Houston Elementary off Teasley must walk or ride in the street to get there, and Sarah’s request aims to change that by having a dedicated space for cyclists and pedestrians.  She’ll be checking back with the City Manager’s office in two weeks to inquire whether any action has been taken.