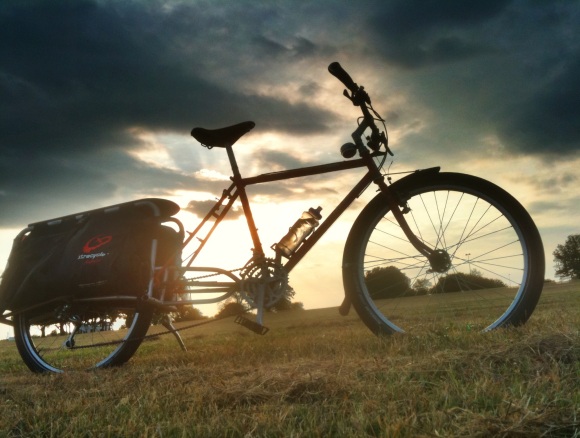 When I sold my car three years ago, I could carry about two bags of groceries home on my road bike in panniers.  With that much weight over just the rear, steering got wobbly and scary, and I couldn’t carry as much as I wanted to.  So I bought a used Burley D’lite trailer off Craigslist for $100.  Now I could haul 100 lb loads, but I had to plan accordingly and hook up the trailer.  The bike and trailer were a little long to park at some bike racks, and the connection & disconnection was a little tedious.  Finally, I bought an xtracycle kit.  Why didn’t I buy a Big Dummy?  Because this was much cheaper and I liked the way this uses a repurposed bike frame.

I combined the kit with a free 1980’s Diamondback Ascent MTB frame, and some cheap parts from Querencia Community Bike Shop.  Installation was easy and took about an hour, and you get the rear xtra frame + long brake/shifter cables, and a chain extension.  I added a CETMA cargo rack on the front, Ergon GP1 grips, Schwalbe Big Apple tires, and a Brooks B17 saddle.  I wanted the bulletproof tires because getting the bike upside down or raised to remove the rear wheel is quite a task, so I opted for the Schwalbe tires plus slime tubes.

So far, I’ve carried six bags of groceries at once, one person, an amp and a guitar, two folding tables, and hundreds of parts for Querencia.  It carries almost anything with ease.  Almost.  When I’ve tried to carry an unbalanced load, such as a guitar amp on one side only, the bike leans unless I carry a counterweight (a cinderblock does fine).  If I carry the amp up on the wooden snapdeck, then the bike feels like it wants to tip over.  In the absence of a counterweight, I still prefer to carry dense and heavy things, like my 3 ton floor jack, on my trailer.

To carry children, xtracycle sells their own Peapod seat.  I haven’t tried this yet, but I wonder if you can carry more than one child?

To carry large side loads, I purchased the wideloaders, which stick out like wings and can support large, heavy loads.  To be fair, I hardly ever use them, but when I need them, they’re really useful.  90% of the time I can carry anything I need to with the normal (now old style) Freeloader side bags, which have straps that can extend surprisingly far to go over really big objects.

So beyond this discussion of cargo capacity, the xtracycle does something that none of my other bikes do: it connects with people, and it brings out a friendly curiosity.  Strangers regularly ask me “did you make that yourself” and pay compliments to the extreme practicality. No other bicycle I own receives this much attention, particularly from people who don’t cycle.  There’s something to be said for that intrigue.  I know, a bakfiet would get just as much attention, but I simply can’t afford one.  A bakfiet, with the cargo-forward design, carries loads up front, which gives it a range of advantages and disadvantages well-covered by the Austin-On-Two-Wheels blog.

In short, this is my desert island bike, the one I would keep over all others.  It’s just too damn useful to do without.  It rides like a cruiser, and that makes me a relaxed rider.  The extended wheelbase makes it feel very stable and predictable, loaded or unloaded.  I don’t mind riding it long distances.  Neither do these folks, who rode from Alaska to the southern tip of Argentina.  There aren’t many things in this world that make you feel capable of anything.  This is one of them.

4 large bags of groceries = no problem 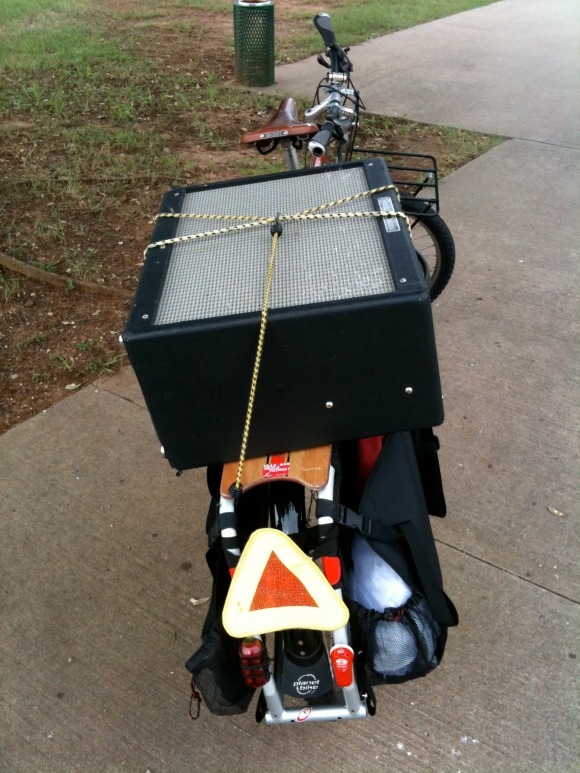 guitar amp on side + counterweight = stable 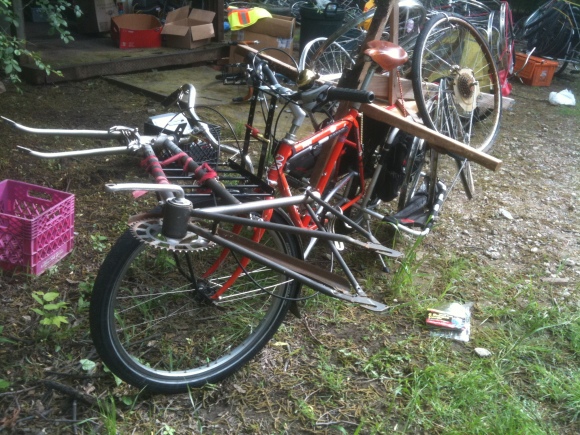 towing another bike with just one bungee cord

4 thoughts on “Xtracycle: one year review”